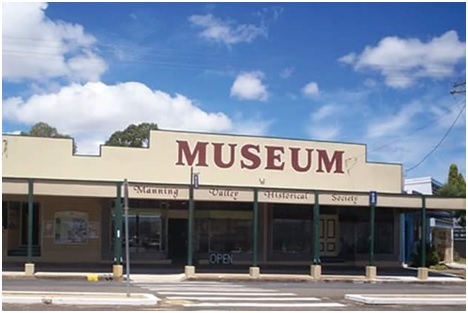 After the unprecedented period of lockdown due to the worldwide Corona virus pandemic, our Museum has now reopened to visitors. To comply with regulations and the risk of a 2nd wave infection, social distancing and hygiene protocols have been put in place with hand sanitiser stations in relevant areas within the museum. We can’t emphasise enough, the need to maintain social distancing when volunteering or visiting and to use the sanitisers when opening drawers and examining books for sale.

The AGM will be held at the Wingham Memorial Services Club auditorium. The change of venue is to allow for social distancing.

Reminder that membership fees are now due.

Over the period of lockdown, a small number of volunteers has continued to work behind the scenes. Over this period some projects have progressed with the renovated workroom completed, museum floors coated with decking oil and insulation and shelving erected in the new maintenance shed. Ideas are being considered to make the workroom a dual purpose workroom/ display space.

There are some new window displays, one titled ‘Versatile Wire’. As wire became cheaper and more flexible in the late 19th C, more ornate objects and bird cages were created. Another window display is titled ‘See NSW’ utilising vintage suitcases & other items from our collection which indicate travel. 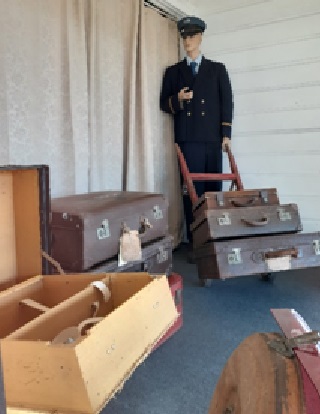 A State Government Grant has allowed us to install new soft closing drawers to house Fred Murray’s bird egg collection, which comprises of 150 eggs from many local species some of which are regarded as endangered. The Murray descendants came to the Manning in 1848/51. Fred was born in 1917 and the family first lived at Redbank now Pampoolah, until 1924 and later moved to Harrington. It was in this period of his life that Fred developed his love for natural history and started his collection. Due to current day environmental laws, collections such as this can never be replicated. A very relevant footnote to this, is that even those early day collectors had an unwritten law that they would only take ONE egg per species each season. 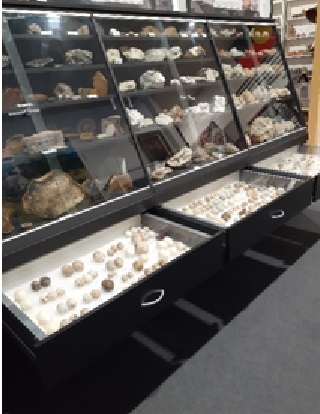 Wingham Rotary Club have generously given MVHS a donation of $250 in recognition of the role of our organisation in the community. Many thanks to Rotary. 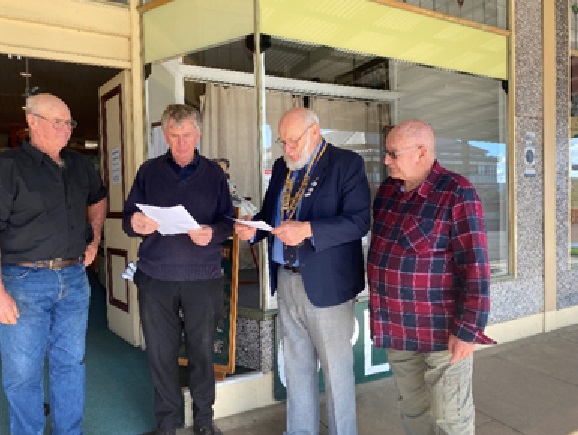 Framed photos which have been in storage for many years have been hung on our meeting room walls and some have been removed from frames, scanned and added into our electronic photo collection.

A grant for shelving was received for our new storage room area. Large framed photos and fabrics are now stored in this section.

Books Soon to be Printed 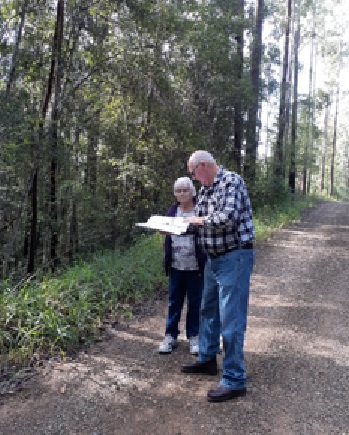 Arthur Cooper has been compiling information about timber getting at Langley Vale, for his book called ‘The Forgotten Langley Vale Tramway’. Recently Neale and Robyn Greenaway, Arthur and Pam Murray travelled to the escarpment area above Langley Vale to where the tram, mill workers and camps were situated. They also visited the wharf area, from where timber was shipped to Sydney. Arthur wanted to give Pam, a ‘feel’ for the area before she started proof reading the manuscript. Len Klumpp left us a message on Facebook, to say his great grandfather, Christopher Klumpp and grandad, Frank, worked there at the time of the Langley Vale tramway. His great grandfather drove a bullock team and his grandfather was a sleeper cutter and they are featured in a film that was made at the time.

Arthur is also compiling a complete History of all ships built in the Manning Valley until WW2. Both booklets will be for sale at the museum. 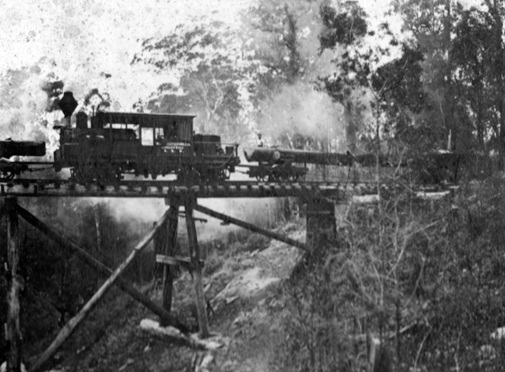 Fire at the Steam Packet Hotel 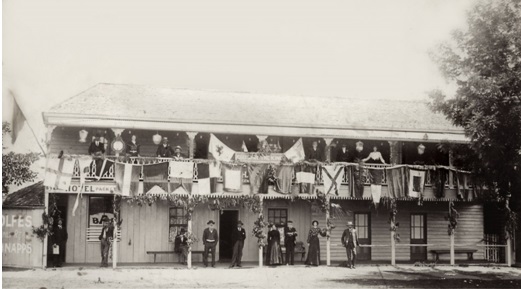 The Steam Packet Hotel, which was constructed for William Wootton stood close to where the bridge crosses the Manning. It was well located close to the steamer port which attracted dozens of townspeople when a ship was sighted. 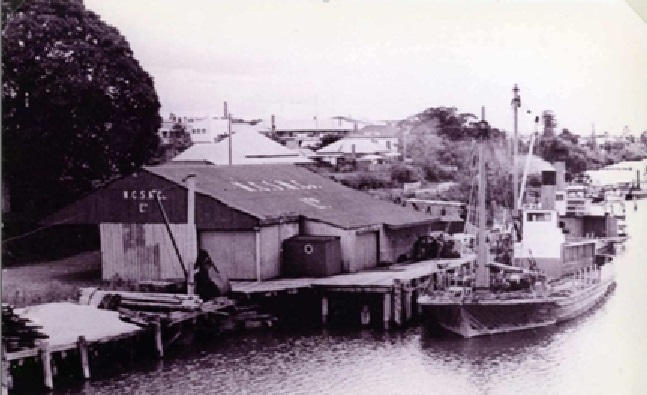 Mrs Hannah McMahon took over the lease of the hotel on the death of her husband. The hotel was burnt to the ground in 1913 when fire raged through the building. Workers laboured frantically to try to save furniture and fittings from the hotel even trying, unsuccessfully, to lower pianos from the upper storey.

The hotel provided accommodation, a range of bars and stables for the use of visitors. It also served as a venue for inquests, farewell parties and a space for visiting specialities and sales people.

The old building was a two storey place which eventually provided fine fuel for the flames which broke out in 1913.  The first alarm was given at 1 o’clock but was by that time well established.  The fire broke out while many people were in the dining room. They all had to flee. ‘It was fortunate that it broke out in the middle of the day, for a fire at night of such fierceness and in such a place might have meant the loss of a number of lives.’ In half an hour both the old and new portions of the hotel were destroyed.  ‘The fire just burned like a gigantic mass of waste soaked with benzene would burn. Viewed from Albert Street before the fire-bell ceased ringing, it seemed as though one puff of smoke burst from the place at one moment, and at the next one mass of flame.’ The fire brigade arrived promptly but it was quickly apparent that the hotel could not be saved. Willing workers strove to save as much as they could. A lot of furniture was moved out on to the street, some of it lowered from the upper floor by way of the balcony. They even tried to lower a piano to the ground from the balcony. However, ‘the rope broke and the instrument smashed to pieces on the pavement. Another piano was being lowered by the rope, when the hold gave way and it fell on the verandah floor beneath with a thud that made the notes within it groan like a nervous human being.’ The furniture was first stored on the street but then was moved to the green opposite the hotel as the flames grew higher.

‘Within an hour the hotel was a mass of ruins, and though the fire was still blazing it was blazing itself away. It continued right on through the afternoon and night.’

The firemen had given up on the hotel by this stage and turned their attention to the cottage next door which was owned by Mr A.M. Wynter and to several weatherboard houses that stood nearby.  Fortunately, the firemen saved the other properties though they were greatly scorched and the windows broken. The wind then changed and drove the flames back through the hotel and threatened the home of Mr Alf Northam who hung out wet blankets to protect his home. Water was taken from half a dozen underground tanks and some galvanised iron tanks and the firemen had to constantly move their lines as the tank they were working on emptied.

Mrs McMahon and her family were devastated. Not only had they lost their property but also a lot of money. £850 had been stored in the building. ‘Many of the sovereigns and half sovereigns had melted, and congealed pieces of gold were lying amongst the ashes. Some of the sovereigns were quite intact. Others were blackened and defaced, whilst others had corners and portions burned off. Under the superintendence of the police men set of work and picked up the sovereigns and gold, and also gathered up the ashes and charcoal, so that any gold which might lie in the mass would be recovered.’ 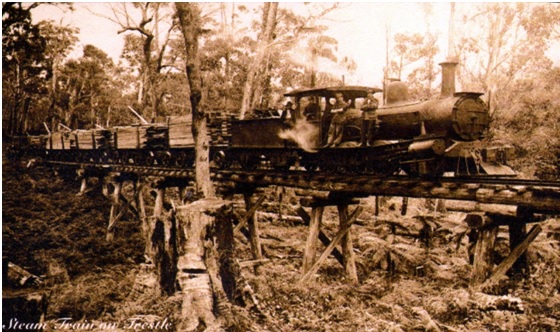